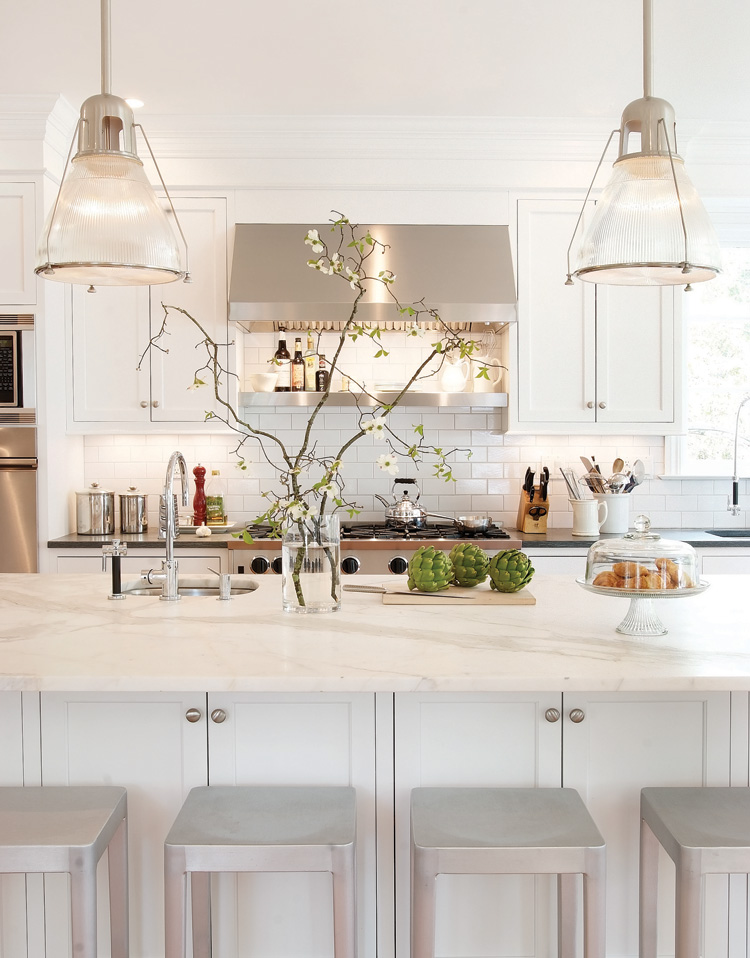 “When I leave, it should look like I was never there,” says Katja van der Loo, CEO of Papyrus Home Design, a Boonton, New Jersey interior design firm. She’s describing the desired end result after a remodeling project. “Whatever style the kitchen is, if it is in keeping [with] and respectful to the architecture of the home, I think that’s when it’s most successful. This bright kitchen would look awful in a different type of house. In this house, it looks incredible,” she says.

When van der Loo was hired for this project, she found a kitchen stuck in the ’80s. The older part of the home had a classic design but suffered from a poorly executed addition. The remodeled portion appeared to be tacked onto the house as an afterthought. The owners, a couple with young children, needed a fresh start. The previous construction was removed and a new three-story addition was planned for the back of the house. This kitchen was part of that project. “We had to seamlessly blend the old with the new,” says van der Loo.

“I knew this client was into balance and symmetry, and that’s how I approach things too,” explains van der Loo. “The cleaner it is the better it feels, I think.” Balanced designs create a calming effect, which is helpful for any busy homeowners.

The range and island are perfectly centered, as are the large glass pendant lights. “Those pendants add an industrial touch to the kitchen,” she says. And they are grand enough to be noticed. “The kitchen has nine-foot ceilings and the island is nine feet long. I felt we needed something large scale to balance all that space.”

Off to the side, the bench seating that skirts the wide bay window is also perfectly symmetrical. The seat cushions are custom, while store-bought pillows in gray, white, and taupe finish the look. Drawers beneath the window seat add more storage, which the homeowner uses to keep serving pieces that are rarely used. 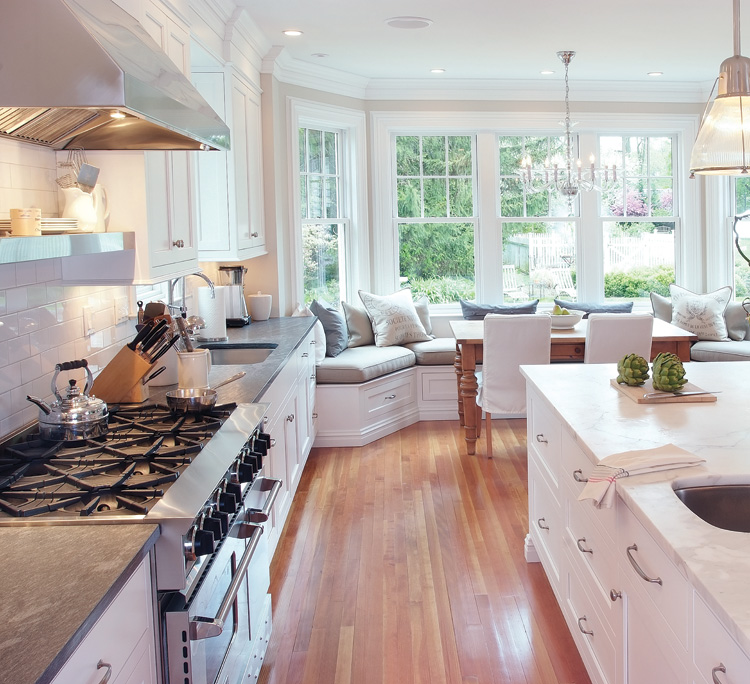 In any remodeling project, it’s smart to save dollars where you can. The homeowners already had the table and chairs used in the eating nook. Chair slipcovers were a practical selection because they could be removed and machine washed if the children spilled on the furniture. A glass chandelier, with a traditional shape but modern transparency, sparkles above the dining table. The transparency gave an added benefit to the room. “The garden, which you can see through the windows, is spectacular. I didn’t want anything to obstruct that view,” explains van der Loo.

The children use the small desk off to the side to work on arts and crafts projects. Open cabinets above the desk make books easily accessible. A printer is hidden in one end of the island, which provides easy access without visual clutter. At the island sit practical and lightweight aluminum barstools, which van der Loo calls “indestructible.”

Attention to proportion promotes the calming effect as do the colors and materials used. The cabinets, subway tile, and crown moldings are awash in white. Room flow is enhanced by how the cabinet molding merges seamlessly with the crown molding that circles the room. Pietra cardosa, a mineral-laden gray stone, tops the perimeter counters. Neutral paint with the slightest hint of gray covers the walls. The range and hood serve as the room’s focal point, while other appliances are hidden beneath cabinet panels.

One of the homeowners has a great passion for cooking and baking and many of the room’s features align with that. Many an amateur baker covets a marble surface, so statuary marble tops the island at the homeowner’s request. A high BTU range is professional grade and the warming rack above it aids in meal prep. A mixer lift is hidden in the other end of the island.

“A lot of people store mixers in a pantry, but that’s not convenient. With a lift, you open the cabinet and it pops up. When you’re done, all you have to do is clean the bowl, then it pops back down to be hidden in the cabinet again.”

A custom cabinet to the right of the range hides steel cooling racks for baked goods. To the left of the range is a wall oven and microwave. To the side of the island is a wet bar. It contains a beverage fridge and a small sink. This spot is adjacent to the family room, which is helpful for enter-taining. Guests can serve themselves without getting in the way of food prep in the main cooking area.

Symmetry, soothing tones, and hiding places that keep clutter at bay—each element plays a role in creating a calming atmosphere that draws the family together. “I love the openness and balance of this room,” says van der Loo. “But you know what the best thing about this kitchen is? It’s how you feel when you’re in it.”