You Need a Professional on Your Team When Buying a Home 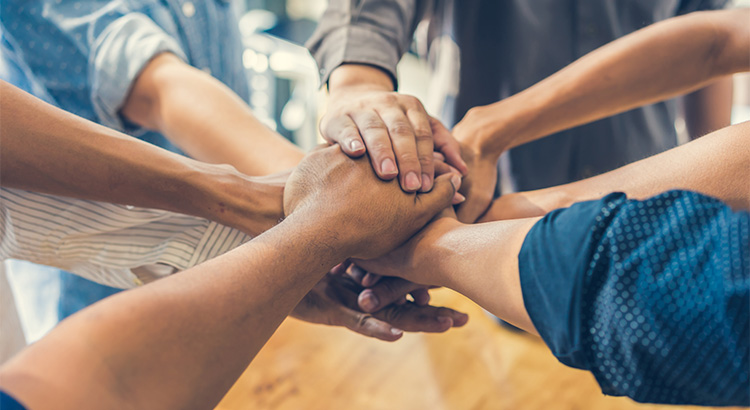 Many people wonder whether they should hire a real estate professional to assist them in buying their dream home or if they should first try to do it on their own. In today’s market: you need an experienced professional!

The field of real estate is loaded with land mines; you need a true expert to guide you through the dangerous pitfalls that currently exist. Finding a home that is priced appropriately and is ready for you to move into can be tricky. An agent listens to your wants and needs, and can sift through the homes that do not fit within the parameters of your “dream home.”

A great agent will also have relationships with mortgage professionals and other experts that you will need in securing your dream home.

You Need a Skilled Negotiator

In today’s market, hiring a talented negotiator could save you thousands, perhaps tens of thousands of dollars. Each step of the way – from the original offer to the possible renegotiation of that offer after a home inspection, to the possible cancellation of the deal based on a troubled appraisal – you need someone who can keep the deal together until it closes.

Famous sayings become famous because they are true. You get what you pay for. Just like a good accountant or a good attorney, a good agent will save you money…not cost you money. 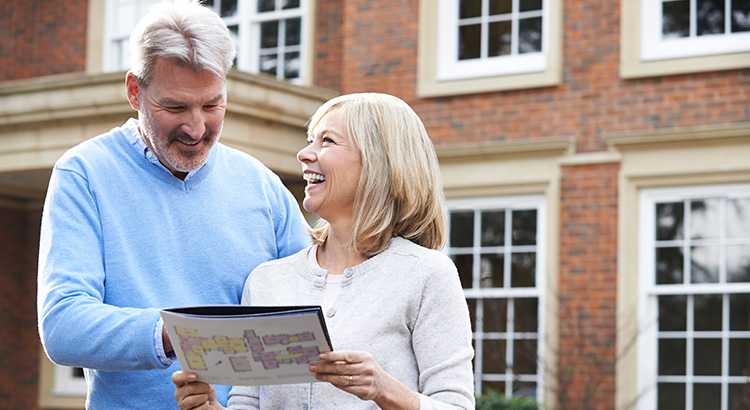 According to data from the U.S Census bureau, there are approximately 76.4 million baby boomers living in the United States today. Contrary to what many think, there are very different segments within this generation, and one piece that sets them apart are their housing needs.

John McManus, editorial director of Hanley Wood’s Residential Groupsays his company “is focusing on the preferences of the younger half, or second-wave baby boomers, as they exhibit different needs than the older boomers.”

What are ‘second-wave baby boomers’ looking for?

McManus says, “They are seeking a fun, dynamic lifestyle with a home that can also adjust to their changing needs in the future. Living space should either include accessibility features, such as doorway space, lower shelves, and nonslip surfaces, or be easily adjustable when the time comes.”

In a homebuyer study performed by The Farnsworth Group, the participants revealed their reasons for purchasing a new home. The top three factors that influence their purchase include area/location (50.2%), price/affordability (37.4%), and the layout of the home (19%) (as shown in the graph below). 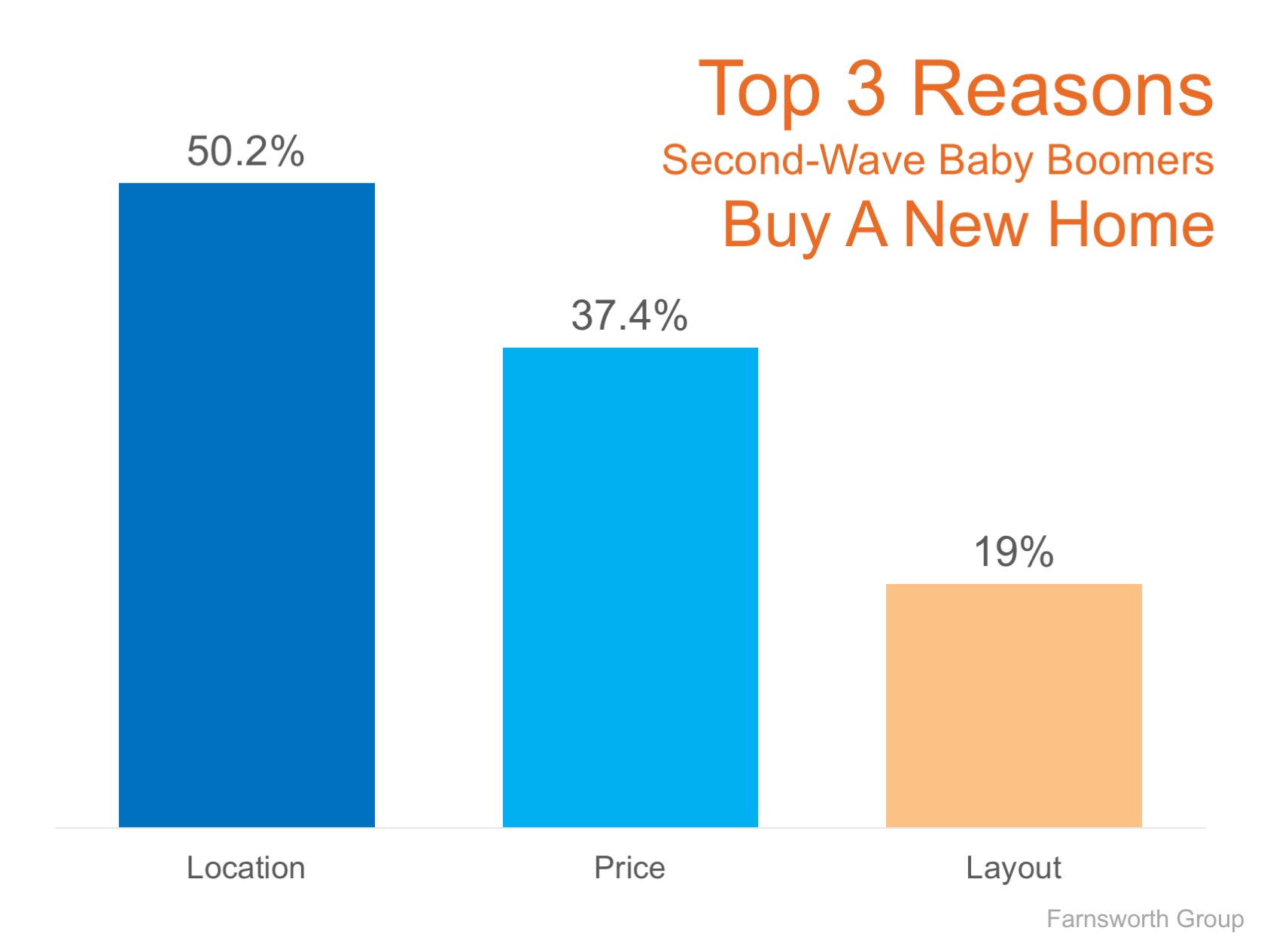 Technology also plays an important role! Second-wave baby boomers prefer wireless security systems (7.1%), lighting that senses and adapts to them (6.3%) and integrated home technology, including “smart” thermostats and lighting controlled by a smartphone (6.2%).

Grey Matter Research and Consulting points to a sense of community as a major factor in wanting to purchase:

“The first impressions are important when entering a new community, as is feeling welcome in the community. Amenities such as clubhouses, pools, and walking trails featured prominently in the decision to purchase in a community. Location was key, as residents want their new homes to be near shopping, dining, medical services and entertainment.”

If you are one of the many ‘second-wave’ baby boomers who is starting to feel like their current homes no longer fit their needs, take advantage of the low inventory of existing homes in today’s market by selling your current home and moving on to one that truly fits your new lifestyle. 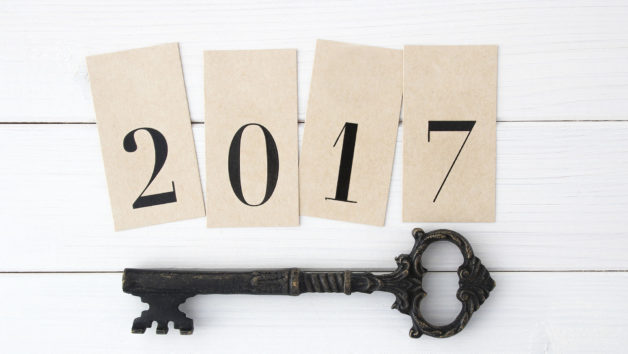 Let’s finish out the year with a holiday basket packed with good news: We’re ending 2016 in better economic shape than in recent years. Unemployment is down to 4.6%, its lowest level since August 2007; consumer confidence is higher than it has been since July 2007; and home values nationally and in more than half of the major markets in the country have recovered.

We’re employed, confident, and have recovered equity in our homes. The stock market is up and flirting with all-time highs.

That sounds like the perfect backdrop to buy a home in 2017, whether it’s a first-time purchase, a move up, a downsize, or a relocation. Right?

Maybe. But before you take the plunge, you’re going to have to come to grips with two factors that are now decidedly worse for buying than they were at the end of last year: Mortgage rates are higher, and the inventory of homes for sale is lower.

Mortgage rates are a bit more than a quarter of a point higher now than they were at the end of 2015. That translates into payments that are 3% higher. Still, that increase can be managed by most.

The key challenge for potential buyers is that rates are now likely to move up more—as much as three-quarters of a point in 2017. That would be increasing payments by an additional 9%.

Tight inventory levels have been a problem for more than four years. As sales have grown, supply has fallen. We’ve seen the age of inventory—how long homes sit on the market—drop dramatically as home buyers burn through the available stock.

We’ve had an abnormally strong autumn for home sales because frustrated buyers are keeping at it even after the end of peak buying season. We also saw more new buyers emerge later in the peak season. Then as mortgage rates started to move up in October and then accelerated their rise in November and December, a new sense of urgency was added to the mix.

As a result of this unusually strong demand in the slower time of the year, we will end this year with at least 10% fewer homes for sale than we had last year. And we thought last year was bad!

Get started on your home hunt now

If your New Year’s resolutions include buying a home, I would suggest getting an early start. January and February typically are the slowest months of the year for sales, as harsh weather in most of the country dissuades most potential buyers.

Buyers in January and February face far less competition from other buyers, yet inventory is only marginally lower than in the spring.

Since mortgage rates are likely to move up as the year progresses, the beginning of the year represents the best time to lock in rates before they get even higher.

Early-year buyers can use the holidays to get ready. Organize your financial information to make getting pre-approved for a mortgage easier. Use realtor.com® to find an expert local Realtor® to help you. And while you are there, sign up for alerts on new homes and price changes on neighborhoods that interest you.

Jonathan Smoke is the chief economist of realtor.com, where he analyzes real estate data and trends to develop market insights for the consumer. 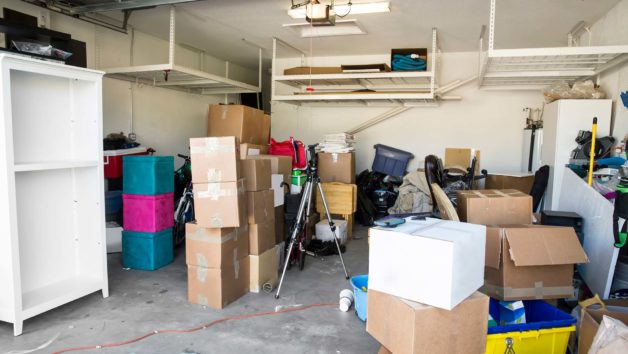 If you’re about to move to a new home, there is one thing you absolutely must do: Declutter before moving. Really, this is your big chance! There is no better excuse than an upcoming move to unload dead weight.

Think about it: For one, moving costs money—an average of $1,170 for an in-state move or a whopping $5,630 for out-of-state—so every box you pack adds up. Plus, you want your new place to look awesome, right? Cramming nooks, crannies, and closets with junk just isn’t pretty.

All of this is our long-winded way to say it’s high time you started chipping away at your possessions. For help on that front, check out these guidelines on how to declutter before moving.

Try to start purging at least a month before you move, says Ross Sapir, CEO of Roadway Moving in New York City, which moves up to 6,000 customers each year. The reason: This gives you time to, say, sell items online or drive them to a consignment shop. Plus, advance decluttering “spreads out the (task) to make it feel like it’s less work than it actually is,” Spair says.

Try to tackle one room, or one closet (or one drawer) a day—it’s less overwhelming—and never handle an item twice. Designate “toss,” “donate,” and “sell” boxes, and when you decide an item’s fate, toss it into the correct box. Done, done, and done.

Gather organizational tools like packing tape, black markers, and labels in a tote; that way, you don’t have to rummage through drawers whenever the decluttering bug bites. After all, you’re going to need to get this stuff for moving day anyway, so there’s no harm in kicking things off early.

Another huge help? Clear plastic bins are your friends—and great homes for small items like batteries or office supplies. You can see what’s inside, and they’re easily stackable to save space.

Step No. 3: Consider the size of your new home

Before decluttering, think about your new home and how much space it contains. That will help you decide whether to move that extra set of pots and pans, or donate them. But even if you’re moving into a home with equal or more space, that doesn’t mean you should use this as an excuse to keep everything you own. Clutter and extraneous crap is clutter and extraneous crap!

Step No. 4: Target these top things to toss

Here are some common items you can almost certainly do without. Be merciless, and get them out of your life!

Share
8 Things to Learn From Open Houses (Whether or Not You’re Buying)
Share
To-Dos: Your January Home Checklist 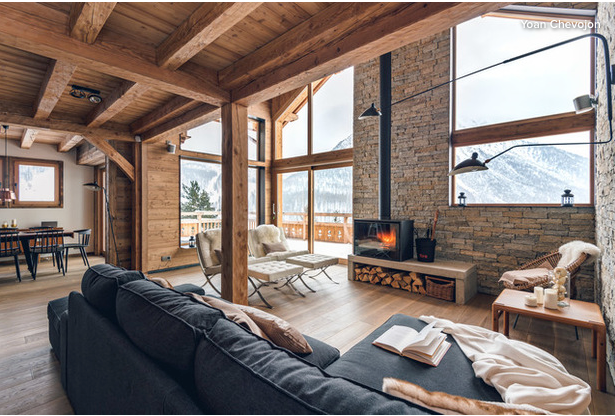 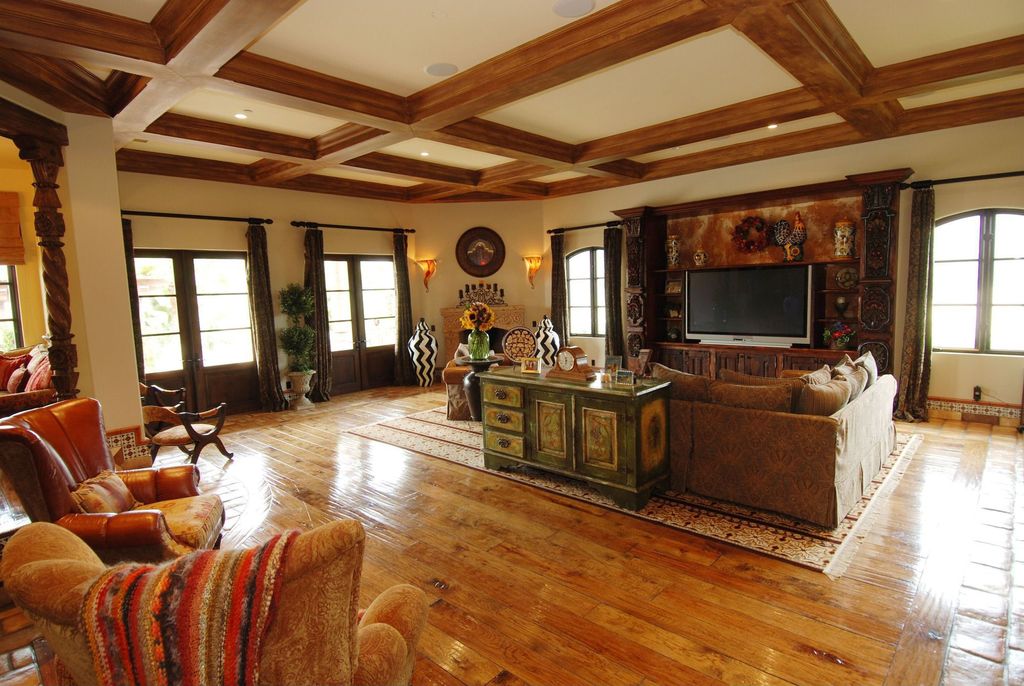 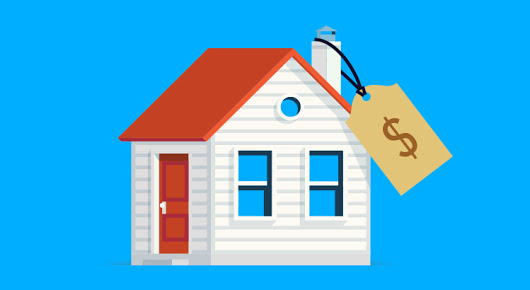 Prices rose in MA 4.7%.  While it is less than the national average, the Boston market remains more stable than a lot of markets in the US, and saw less depreciation compared to many others during the downturn. 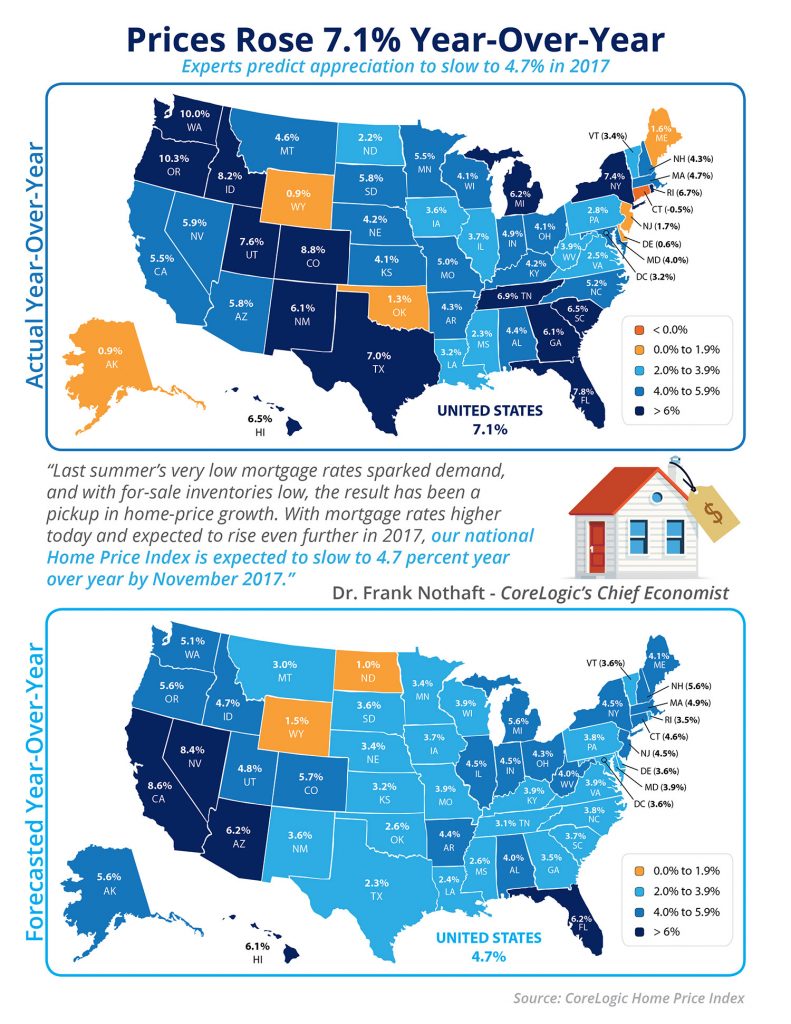 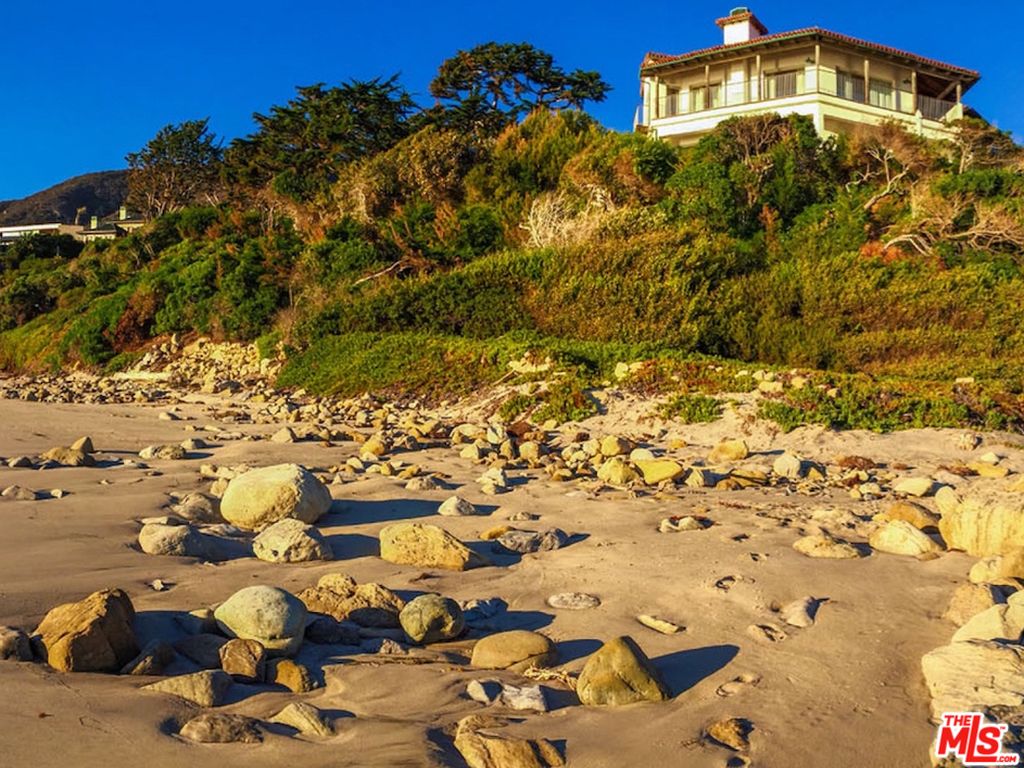 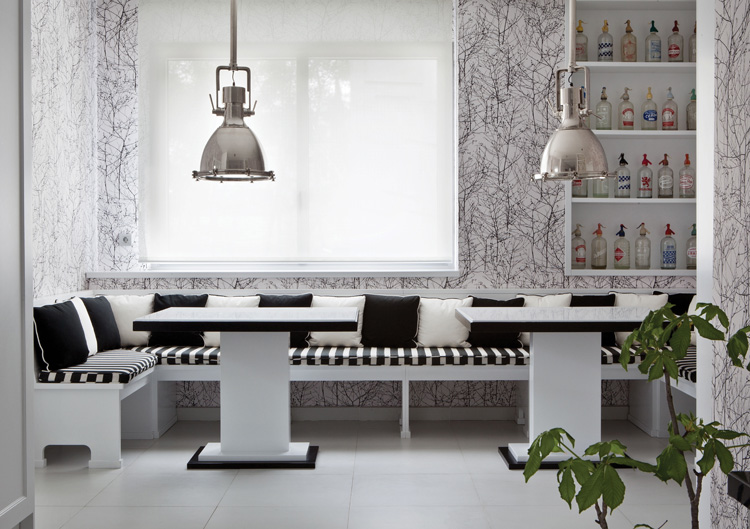